Why a special issue about the Zwin?

Flemish ecologists designated the Zwin complex for the development of a near natural landscape,  a major condition being the restoration of the estuarine character. Therefore the expansion of the Zwin is necessary as model studies show. In 2019 this expansion will be the crowning glory after about 15 years of intensive policy work and nature management in and around the Zwin. In this article an overview is given. Some important milestones to Belgian side are the purchase by the government of the current nature reserve ‘Zwinduinen en –polders’ and later on the Zwin salt marsh area and bird park. On Dutch side the Zwin already is managed as a nature reserve by Stichting Zeeuws Landschap since 1938. An ambitious monitoring program will assess the impact of the Zwin-expansion in the estuarine environment until 2034. It will focus on coastal bird populations, vegetation development, macrobenthos communities and changes in abiotic conditions.

Siltation of the Zwin: myth and reality

Not so long ago, intertidal areas were seen as unstable bits of nature that had to be put dry to exploit their economic potential. Today we see that they play a very important role in the protection and preservation of ecological diversity in one of the most dynamic areas we know on earth: the interaction between land and sea. The Zwin nature reserve is one of the few so-called slufter areas in Central Europe. However it is in real danger due to siltation and migration of the main gully. Which physical processes influence the inlet of water and the silting up today? How do we want to aid those natural processes? What do we want to learn from it and how are we going to do that? And what may be the future threats and opportunities for this precious piece of cross-border nature.

Macrobenthos are invertebrates that live in or on the seafloor and that are larger than one millimetre in size. Typical organisms are polychaetes, bivalves, gastropods, crustaceans and oligochaetes. These organisms are good bio-indicators for changing environmental conditions such as those that occur as a result of nature restoration projects in tidal areas like salt marsh habitats. The macrobenthos feed on dead and alive organic matter that is either suspended in the water column or present at the surface of the tidal flat, such as microbial biofilms. The macrobenthos is preyed upon by wading birds present on the emersed flats and epibenthic fish, crabs and other nektonic organisms that migrate into the tidal creeks during high tide. The polychaetes Hediste diversicolor, Heteromastus filiformis, Capitella capitata and oligochaetes are the most abundant macrobenthos species in the Zwin tidal area. The most diverse assemblage and the highest biomass of important prey species (H. diversicolor and the bivalves Scrobicularia plana and Limecola balthica) for wading birds and nekton are found in the muddy and organically enriched sediments that are present in the low-hydrodynamically stressed habitats. The extension of these tidal habitats in the Zwin tidal area is expected to enhance the provision of ecosystem services and functions that are mediated by the macrobenthos in this type of habitat.

Coastal breeding birds in the Zwin

The Zwin nature reserve is one of Flanders’ most important breeding sites for coastal breeding birds. During the beginning of the 20th century the beach in front of the Zwin hosted up to 75 pairs of Little Tern and 70 pairs of Kentish Plover as well as some Ringed Plovers. Furthermore, up to 40 pairs of Avocet bred in the adjacent salt marshes. Because of human disturbance, numbers at the beaches strongly decreased around 1950. In 1960, newly developed breeding islands were quickly colonised by Black-headed Gull and Common Tern and their numbers strongly increased until the 1980s (maximum numbers amounted to 9000 and 375 pairs), while Avocet was able to hold up in the salt marshes. As vegetation succession on the islands developed, smaller numbers of other coastal breeders (a.o. Mediterranean Gull, Herring, Gull land Lesser Black-backed Gull) colonised the Zwin. With the development of the port of Zeebrugge in 1985, the Zwin started to silt up, the vegetation quickly changed and the breeding islands became accessible for humans and land predators, leading to a strong decline in the number of coastal breeding birds from 1987 onwards. As a part of a restoration project, in 2014 new islands were created and except for Kentish Plover all other coastal birds successfully recolonized the Zwin. Maximum numbers up to 2017 amounted to 23 pairs of Avocet, 50 pairs of Little Tern, 366 pairs of Common Tern, 883 pairs of Black-headed Gull, 190 pairs of Mediterranean Gull and smaller numbers of other species. During 2015-2018, management of the vegetation, supply of shell material and adjustment of the height relative to the water level were needed to maintain suitable breeding conditions. It is expected that with improved water management in 2019, the islands can be flooded during winter and vegetation management will be less needed. In 2019, new breeding islands and an expansion of the surface mudflats and salt marshes will be realised that will probably boost up the importance of the Zwin even more. Being an important breeding site situated within the Delta metapopulation, the Zwin plays a key role in the preservation of threatened and vulnerable coastal breeders both in Flanders and in the Delta area as a whole.

The Zwin nature reserve is an important wintering area for several waterbird species, especially ducks and waders. Regular waterbird counts that started in 1967 provide reliable information about  the number of birds and overall trends during the last decades. The most numerous duck species are mallard, wigeon, teal and shelduck but they all show a decreasing trend, especially during the last 10-15 years. Typical wader species are avocet, oystercatcher, grey plover, dunlin and redshank. Long and short term trends differ between these species. Especially those species that prefer to feed in shallow, muddy waters such as avocet and dunlin, have clearly declined in numbers. In contrast, numbers of oystercatcher -a species that is mainly foraging on sandy sediments- remained more or less stable. This is at least indicating that the silting up of the Zwin reserve is a determining factor in the trend of some waterbird species. More detailed studies are however needed to get a better insight in the relationship between habitat changes and bird numbers. Therefore, it is recommended to include waterbird species within monitoring and research programs that are set up in order to evaluate the current nature restoration project.

Flora and vegetation of the Zwin intertidal area

Acquisition, restoration and extension of the Zwin intertidal area by the Flemish government implied the establishment of a new ecological monitoring scheme. This paper integrates results of this monitoring and earlier vegetation mapping. An overview of vegetation types and target species is given and changes in vegetation are discussed. The extension of Sea Couch (elytrigia atherica) and Sea Purslane (Halimione portulacoides) are the most apparent trend over the past decades. Apart from inundation frequency effects of human interventions in topography, hydrography and management also largely determine the observed patterns and processes.

After ± 50 years of abandonment, periodic cattle and sheep grazing was reintroduced in the Zwin salt marsh at the border of Belgium and the Netherlands. The reintroduction of cattle and sheep is part of the European Life Project ZTAR (Zwin Tidal Area Restoration), implemented in the period 2010-2015. Grazing blocks with cattle and sheep include all vegetation types of the estuary. The main goal is the restoration of typical pioneer salt marsh vegetation types. More in particular, grazing management aims at decreasing the cover of the locally dominant  Elymus athericus in the lower and higher salt marsh respectively. The cover of this species and further succession to vegetationtypes of the higher salt marsh are probably a result of the abandonment of former grazing and progressive sediment accretion. We used paired relevées in grazed and ungrazed plots and studied vegetation development in transects that were set up before the implementation of restoration measures and the introduction of grazing animals in the newly build grazing blocks. We found an overall rather variable response of plant species to grazing. In general, grazing increased species richness on a small scale. Further succession and expansion of E. athericus seems to be slowed down by grazing and some species of lower salt marshes are able to expand in grazed areas (e.g. Aster tripolium and Salicornia sp.). Habitat use of cattle confirms the potential of grazing management for salt marsh restoration. GPS-data revealed a clear preference for grass dominated vegetationtypes (including those dominated by E. athericus). Salt marsh vegetationtypes were avoided, except the high salt marsh and grass dominated salt marsh types. However, vegetation analysis between 2010 and 2016 revealed the problem of progressing  silt accretion, causing desalination and drier soils. This problem needs to be solved to guarantee successful restoration that includes grazing management.

The European tree frog (Hyla arborea) is a rare species in Belgium and the Netherlands. It occurs in marshlands, damp meadows, reed beds, and sometimes gardens. The population in both countries is severely fragmented. Therefore this species is listed in both countries on the Red List as threatened. It is strictly protected under the Bern Convention (Annex II) and the Habitats Directive (Annex IV). Until the seventies an important Belgian-Dutch cross-border population occurred  (provinces West-Flanders and Zeeland). This population declined  and became fragmented due to habitat loss. At the end of the 1980s only about 520 calling males remained. The local NGO’s worked out a first cross-border nature habitat restoration program in the nineties. As a result the local tree frog population stabilized. Next, the NGO’s and the authorities worked out a more structural restoration program including a network of new tree frog-minded nature reserves and corridors.  This structural restoration program (the Netherlands 2002-2010, Belgium 2008-2010) proved to be very successful, as the Zwin tree frog population rose to approximately 3400 calling males by 2017. A further increase is expected.

Estuaries are amongst the most scarce ecosystems. The Belgian-Dutch cross-border nature reserve ‘Het Zwin’ is very important for nature conservation for its variety of sand-dune, saltmarsh, sandflat and mudflat habitats, and the plants and animals that this area supports. From 2011-2019 the Zwin is transforming to maintain this top nature area. In this issue we payed attention to some of the special natural values of the area. In addition authors discussed the bottlenecks in particular the silting up, its effects on the ecosystem and the attempts to tackle this main problem. 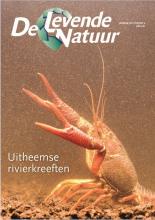