Rather living animals than dead facts

Biodiversity data are constructed upon a grid of observation that consists of ‘someone sees something at a certain time at a certain place’. All components of the grid are results of negotiations between species, technologies, ecologies, cultures and practices. Observers involved in schemes of mapping and monitoring biodiversity navigate the grid while negotiating all the components. By following the rediscovery of the River clubtail I demonstrate how the grid influences what can be seen and vice versa. The River clubtail was rediscovered by a fisherman who found a larva in the waterfilters of a powerplant. When all the components of the grid are extraordinary, it is only logical that extraordinary observations are made. Only after the fisherman repeated his findings two years later, mainstream odonatologists mounted field trips and found River clubtails in all important rivers all over the country.

Neglecting the negotiations and all social aspects that are embedded in the data can be seen as brutality towards biodiversity and the culture in which biodiversity data are carefully groomed. Taking out ‘just the data’ is an amputation that reduces significance because the ‘known unknowns’ of the network will become ‘unknown unknowns’ in the anonymous database. Instead of knowing and certainties, with biodiversity and biodiversity recording it might be better to look for understanding and meaning. Hermeneutics therefore might be a promising scientific approach towards biodiversity and biodiversity data. In hermeneutics, questions are more important than answers and the importance of context is decisive. Looking at the large amounts of biodiversity data from monitoring schemes - and the need for even more data - the hermeneutical approach seems very promising. Looking at the societal battleground and all the controversies between politics and science, the hermeneutical approach is predominantly very urgent.

Effects of stream valley restoration on the carabid beetle fauna

Carabid beetles (Coleoptera: Carabidae) are good indicators of the ecological quality of the riparian zones of running waters. To obtain a better insight into the ecological effects of stream valley restoration, in the form of rewetting of stream valleys, carabid beetle communities of the riparian zones of three restored stream sections in the province of Drenthe, the Netherlands, were compared to the communities of upstream non-restored sections. Carabid beetles were collected between 2014-2019 using pitfall traps. In the restored sections the richness and Shannon diversity of stream bank inhabitants and total biomass of species associated with moist habitats were higher in comparison to the non-restored sections, whilst a lower abundance and diversity was observed for species associated with dry habitats. This indicated that rewetting of stream valleys leads to a shift in carabid beetle community composition towards an assemblage containing more riparian specialists.

Nutrient rich litter: chances for recovery of the nutrient cycle in forests

The adverse effects of soil acidification are extensive and may result in hampered forest ecosystem functioning. Admixture of tree species with nutrient rich litter has been proposed to restore acidified forest soils and improve forest vitality, productivity and resilience. Such tree species boost nutrient cycling and mitigate soil acidification effects by improving humus and soil quality. But what makes rich litter rich? Or in other words, which properties of the leaf contribute to the soil improving mechanism? In this study we aim to answer that question and highlight the potential of certain tree species for the management measure ‘admixing of rich litter’ as to improve the nutrient status of acidified sandy soils.

The effect of rotation grazing on the biodiversity of salt marshes

We conclude that rotation grazing on salt marshes does not directly lead to a biodiversity maximization. So, there is no added value of rotation grazing when the management goal is biodiversity. However, the inclusion of the occasional year without grazing, may benefit some species groups, such as flower-visiting insects. 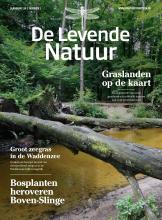